Have you ever had one of those ideas that really has great potential, but you just haven’t started it yet? Maybe it’s a big idea, and you just haven’t found the time to work on it. News flash– your idea is going to die!

Too many great ideas have been killed by inaction. I don’t know about you, but this rings all too true for me:  I have a great idea, and because of either bad timing or circumstances, I don’t act on it. I tell myself I’ll get to it later, but when later comes, it’s too late. The idea is gone.

Fear not! There is hope– this enemy called inaction can be defeated!

Imagine ideas like they are in cartoons. When you have an idea a little light bulb appears over your head. But unlike in cartoons, as soon as you move on from the idea, without action, the light bulb begins to fall. Unless you catch the idea, and do something with it, gravity will do what it does best and bring it crashing to the ground. 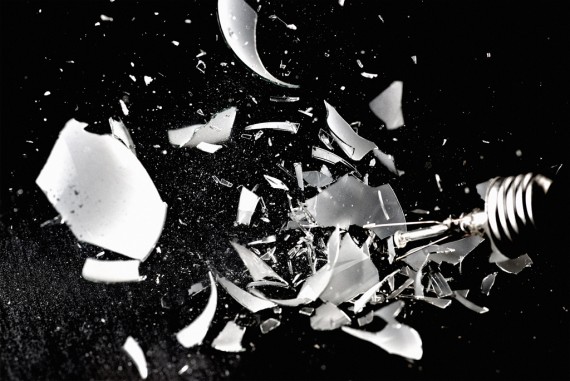 As creative people, if we are always keeping our creative tank full with plenty of incoming sources of inspiration, we should always be churning out ideas. And to make sure that these ideas don’t die an untimely death, we must take action. 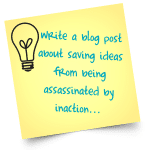 The first thing you should do is write it down, type it out, record it, or by any other means save it somewhere besides your brain.

Personally, I use Evernote to capture my ideas. It allows me to record them on my phone or laptop anywhere. Then it saves the note with a geotagged location where I can add audio, video, or photos to help me remember exactly what was going on when I had the idea.

Find a way of recording your ideas that works for you. Some methods could be:

Do whatever you find that works for you to record your ideas. This way, even if you can’t begin to act on the idea itself, you’ll be able to return to it later.

You’ll want to develop a habit of revisiting your ideas frequently. Even if you’ve recorded them, if nothing is done with them from there, they will eventually become irrelevant and stale. So once you have a minute to revisit the idea put some action to it.

If it’s an idea for a blog post, start on a draft. You don’t have to finish it. Just get it moving in the right direction. Don’t let your desire for perfection stop you from moving forward. It doesn’t have to be perfect.

If it’s a graphic, drawing, or painting– get something sketched out. Get some rough drafts on paper (or on screen) and see where it goes. Again, it doesn’t need to be a masterpiece right away. Just do something.

Random fact: Larry the Cable Guy (who made the saying above famous) actually shares my birthday– February 17th. Another guy who shares this same birthday– Michael Jordan. Can you say, “Chyeayuh!“?

Okay, back to the point.

Finish what you’ve started, even if it’s not completed.

Wait, what? Are you speaking some sort of pseudo-riddle nonsense?

Yes, I am. But hear me out before you write me off as a looney!

Sometimes I have the tendency to take way too long to complete a project (like this blog post for example). Its the plague of perfection again, and it can totally undermine the raw and organic nature of creativity.

Don’t be afraid to put something out there that is unfinished. You can always go back and refine, revamp, and tweak. Don’t let delayed execution become another way for inaction to creep in.

There is a great book that I highly recommend called “Making Ideas Happen”  [affiliate link] by Scott Belsky. The title really does say it all. If you find yourself struggling with taking ideas and turning them into reality, this book is a must have!

Have your ideas ever fallen victim to inaction? How do you fight it off? You can leave a comment by clicking here.

Photo credits: Adriaan Fenwick and Kyle May via Flickr.