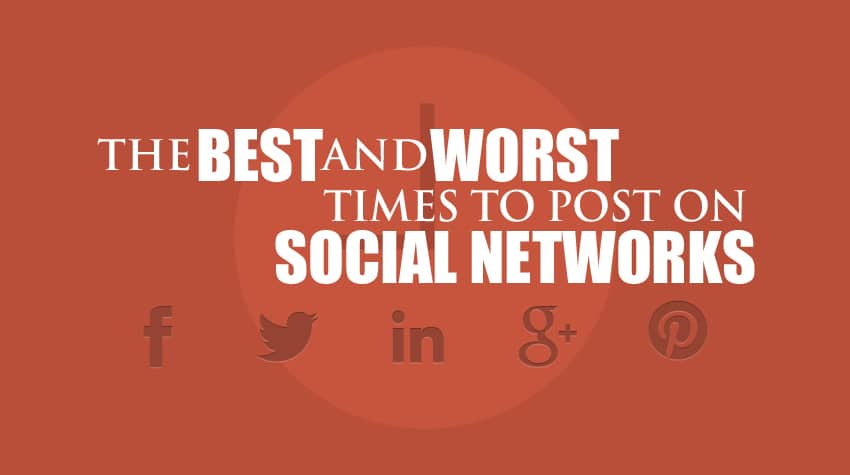 If you’ve been following me for a while, you may have already seen my post on Scheduling Your Tweets for the Highest Possible Impact. Timing is crucial to spreading your message to the widest possible audience.

A Brief Word on Timing

It’s important to note that these sorts of analysis’ are usually based on a very large dataset. They analyze hundreds, maybe even hundreds of thousands of pieces of data to come up with the average.

So when you read the following infographic, just know that your audience may be different. For instance, if you’re trying to reach stay-at-home moms in the U.S., these numbers may work just fine. But if you’re going after the business professional CEO type, some times may not work as well since they are likely to be busy during work hours.

Also, this infographic doesn’t make reference to a particular time zone, but I would assume it to be in Eastern Standard Time.

Know your audience. Try these peak times out and see if they work. Then try adjusting slightly to see what difference it makes. You might also just observe when key influencers in your target audience post the most and try sending out your messages around those times.

All that said, here’s what this particular study found on the Best and Worst Times to Post on Social Media via SocialCaffeine.com:

And here it is written out in case you can’t see the infographic above:

Two Tools for You

If you’d like to really get a good idea of your particular audience, SocialBro [affiliate link] is one of the services out there that will analyze your audience (specifically on Twitter) and tell you when the best times to tweet would be for your particular audience. They have a paid service, but you can also download their free Chrome extension here.

There is also a great web app that will analyze your Google+ data called Timing+. All you have to do is sign in with your Google account and it will tell you the ideal times for you to post based on your previous public activity.

Give both of those a try, and let me know what your results are!

What surprised you about the Best and Worst times to post? Is there anything that you find particularly strange? You can leave a comment by clicking here.