You are here: Home / Creativity / Kick Your Fear of Failure Once And For All 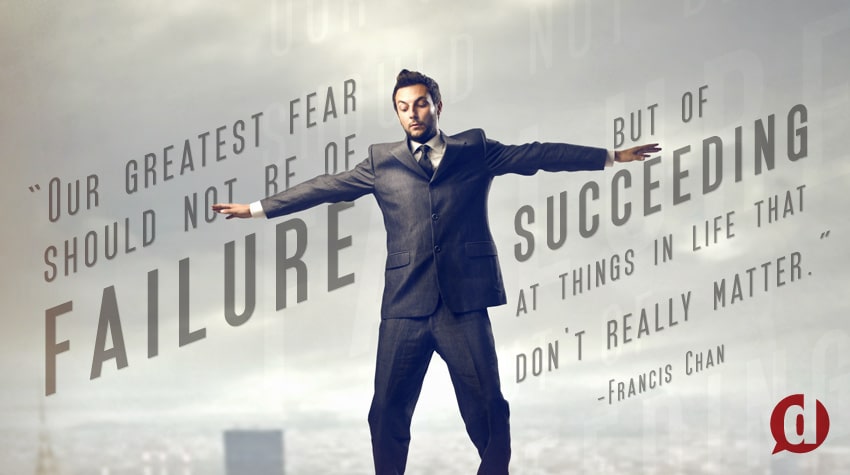 The fear of failure is something we can all relate to. It can stop us from reaching our greatest creative potential and stifle our dreams. And if we let it conquer us, we can end up looking back on our life with a pain greater than that of any failure we could encounter.

I have found one thing that has helped me to kick the fear of failure once and for all, and I hope it helps you do the same.

Have you felt the sting of failure before? I have. It’s not fun, and seldom pretty. I’ve failed more times than I can remember. But I continue to push through those failures because there is something I fear more than failure. In fact, this one thing scares the crap out of me.

The thing I fear more than anything else, and you should too, is looking back on my life and seeing that I was only successful at things that didn’t matter.

You Were Created to Matter

Can you imagine looking back on your entire life and thinking to yourself, “I wish I had played it safer.” I don’t think so. And if you do end up thinking that, the nearest person should punch you right in the stomach.

And it will be worth every second. You must risk it.

Michael Jordan has missed more shots, lost more games, and let more people down than you or I ever have. Because of that, he’s inspired millions.

Walt Disney’s first animation studio went bankrupt in a year. How did he respond? He moved to California to try again. I’m glad he did.

When Thomas Edison’s first attempt at creating the light bulb failed, he tried again. His second attempt failed also. His third, fourth, fifth attempt– all failures. You’d think by the time he got to his 9,999th failed attempt in creating a light bulb the guy would go, “Okay, maybe this whole light bulb thing isn’t my deal.”

Because he refused to let failure slow him down, the lightbulb is now one of the most significant inventions of all time.

In Craig Groeschel’s talk from R12, he talked a lot about failure. In fact, Craig insists that failure is a necessity! Don’t believe me? Read my notes here. His formula is this:

Failing should not be an end point, but a catalyst for getting better. Keep moving forward.

Take the risk and pursue things that matter most. Don’t waste your time becoming successful at things that don’t really matter. The following quote is what inspired me to kick the fear of failure once and for all:

“Our greatest fear should not be of failure, but of succeeding in life at things that don’t really matter.” -Francis Chan (Crazy Love)

As a reminder, I’ve created a set of wallpapers that you can download free and use as you wish. Let them be a reminder that you are created to matter, and to not fear failure. Pursue the things that matter.

You can see them in the gallery at the bottom, or go straight to download each individual image:

If you appreciated this post, I would love it if you shared it with others via the social share buttons below. You never know who might need to hear this message at the right time to give them the kick they’ve been waiting for.

I’d also love to hear your thoughts in the comments below! Tell me what the fear of failure has been holding you back from– what’s the one thing you’ve been thinking about starting that you’ve just haven’t yet? You can leave a comment by clicking here.