You are here: Home / Blogging / How to Promote an Epic Blog Post for 30 Days in 5min 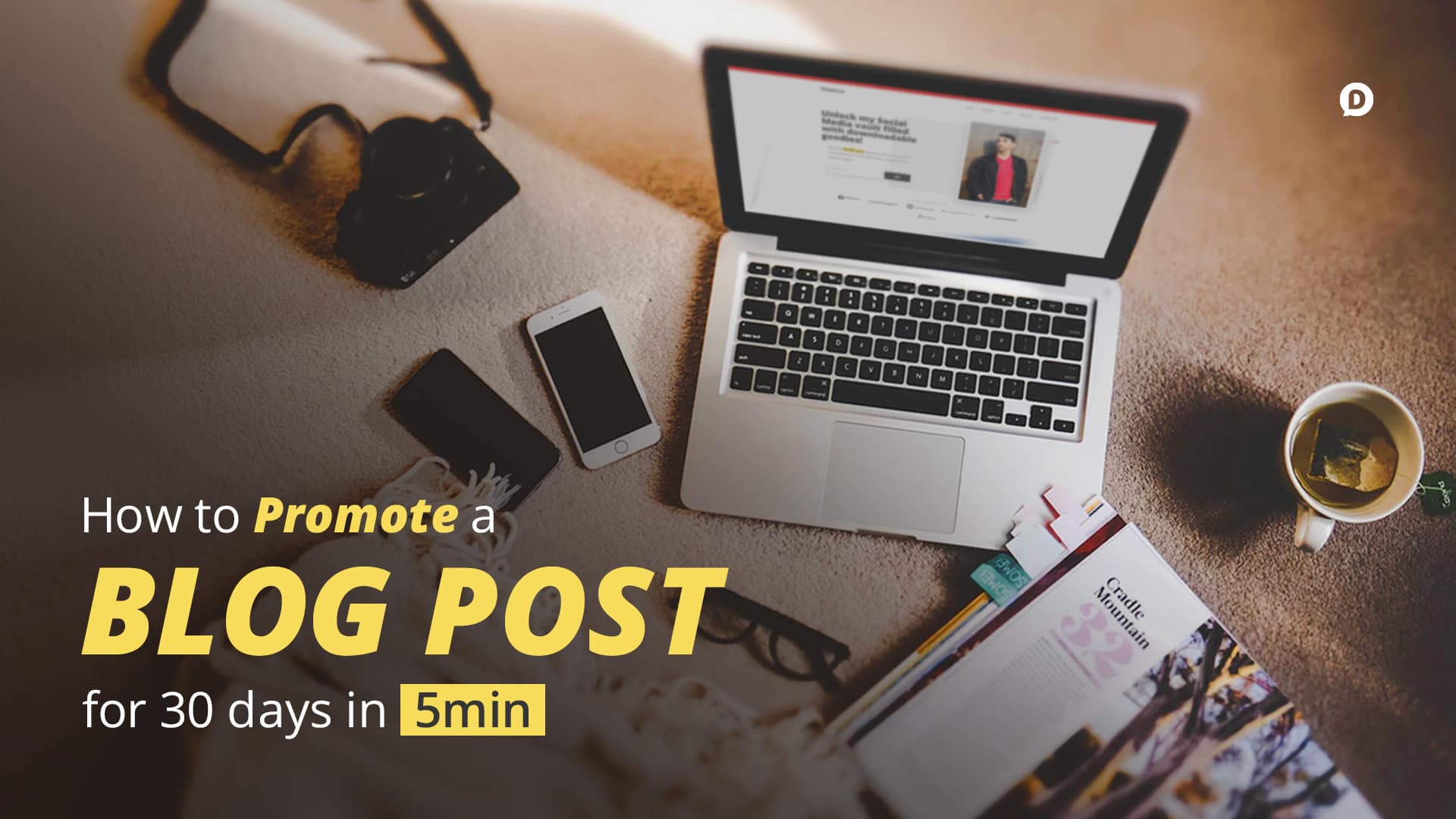 A quick and simple template for creating 30 days worth of social media posts in 5 minutes or less!

Let’s say you’ve just finished up a blog post and it’s a masterpiece. You’ve spent hours crafting it, ensuring that it’s a literary work of brilliance. You’ve carefully crafted your content in a way that people are just going to eat it up and ask for seconds.

Finally, you get to hit that beautiful “Publish” button. Feels good.

But now what? Oh, that’s right–now you have to get that wonderful piece of blog post goodness out in front of people. How do you do that?

But then you realize, “Oh, shoot. Now I have to spend the next 20+ minutes promoting this post across every social network I’m on.” And that kinda feels like:

Let’s face it, promoting your blog posts across all your social networks isn’t the most fun part of blogging. In fact, it can become pretty tedious and boring work if you’ve been doing it for a while.

But what if I told you it didn’t have to be that way?

What if I told you that you could implement a simple social media promotion template that would cut down your time into a mere fraction of what it would normally take you?

You’d probably think I was selling something, wouldn’t you?

Well I’m not here to sell you anything. I’m here to show you exactly how I have mastered the process of promoting my blog posts on social media with maximum effectiveness and minimum effort.

When I publish a blog post, I spend roughly 5 minutes scheduling out 30 days worth of social media shares across 7 different social networks.

And just to be clear, I’m not just sharing out the headline of my article and a link to it. I’m scheduling out 29 different messages over the course of 30 days to 9 social profiles.

How do I do that?

Simple. I’ve created a template, and I use the heck out of it.

For every blog post I write, I create a unique set of messages by filling in each of the following fields, which I call “Text Helpers”:

As soon as a blog post is finished, I fill out each one of these text helpers for the post. Here’s a closer look at what I put in each of them:

Title: This is pretty obvious–just the title of the article. Always keep this 70 characters or less.

Lead: The lead is what I call the brief introduction that I put at the very beginning of every blog post. It serves as a sort of “hook” or a “why you should read this” intro to the post. Its purpose is to make it very clear, in 1-2 sentences why the reader needs to read the article. Keep this to 110 characters or less and make sure you’ve mentioned your primary keyword once.

Summary: This is a longer 2-3 sentence summation of the post. What are they going to get from it without giving it away entirely? You will want to make sure you have all your keywords hit in this element. No character limit, but it shouldn’t be too long.

Quote: Use the best quote from the article or turn one of your best points in the article into a quote. Keep it to 110 characters or less. If your quote is from an influencer, be sure to use their Twitter handle in the quote.

Question: Your article should be the answer to some question or problem that your audience is facing. Formulate that question and use it here, in 110 characters or less.

Tweet: A message that will be exclusively for Twitter–optimize it for the Twitter audience to get the most clicks (add hashtags inline with the text). Again, 110 characters or less.

CTA: This is simply the link to your article.

Hashtags: You should have at least one good hashtag that goes along with your article. You only need 2 maximum.

For example, here’s what I filled out for one of my recent articles:

[Title] = The Biggest Social Media Mistake (And How to Avoid It)

[Lead] = As the recent fate of Vine shows us, you should never put your audience solely in someone else’s hands.

[Summary] = Are you working to build an audience online? If so, I want to warn you about a very serious social media mistake that I see a lot of social media stars making.

[Quote] = “Anyone who says you don’t need a website to develop a successful online presence is a short-sighted idiot.”

[Question] = Are you in danger of making the BIGGEST Social Media mistake?

Once I’ve filled these out, I can start copying and then pasting them into my scheduled social messages. Next, I’ll show you how I break it down for each network.

Download the free Template for exactly what I show you in this article as well as a PDF version of this post to save for your convenience.

For Facebook, I use 3 posts as well, but with a different combination of helpers.

If you’re familiar with how Twitter works, you’ll know it has a much higher posting volume tolerance, so I schedule out at least 5 different tweets for the 4-week span. All of these tweets, except for the first one, has an image uploaded with it.

I’ll then repeat a few of those over the course of a month since it’s likely that all my followers aren’t seeing all my tweets.

For Pinterest, I always have at least 2 or 3 different Pinterest optimized images to use, so I’ll just create a Pin for each one using the [Summary]. I then try to post them to 4 different, relevant boards (making a total of 8-12 different pins).

For LinkedIn, I basically use the same posts as I use for Twitter, but without the image upload. All LinkedIn posts are just link post format for me.

I only promote once on Instagram and I use the custom tweet. I may add a few extra hashtags, but that’s about it.

There’s great SEO value in Tumblr, however, I can’t say whether or not I’ve reaped the benefits of it just yet. Since it’s no extra work for me, I add it in anyways.

If you’ve been following my blog for a while, you probably know how crucially important visuals are in any digital marketing strategy.

So, in addition to the Text Helpers, I also have a number of Image Helpers that I use as well. At minimum, you just need to have a Feature image and a Pinterest image and that will get you plenty far with your social shares.

However, if you have the ability, here are the image helpers I use:

All that in less than 5min?!

Yes. The reason this only takes me 5min is because I use CoSchedule and they have an amazing feature called Social Templates. I was recently featured on their blog talking about exactly how I use it.

Basically, I have created a sharing schedule with my Text and Image Helpers one time and can instantly apply it to any blog post I want using CoSchedule. All I have to do is apply the template, fill in the helpers, and when the blog post is published the social media promotion happens exactly as I’ve set it up beforehand.

Once you’ve crafted all your messages, you can then begin the copy/paste process of scheduling them out. Now, here’s where you can really perform some magic if you want to streamline this as much as possible.

If you have a template such as mine in a text editor, all you need to do is run a Find and Replace for each of the helpers.

Using my example post from above I would start with finding [Title] and replace it with The Biggest Social Media Mistake (And How to Avoid It). Make sense?

Then just do this same Find and Replace for all of your helpers.

If you’ve downloaded my free template from above, I’ve recorded a quick video to show you exactly how I would use this template in real time.

Once you’ve got all your messages crafted, it’s just a matter of scheduling them in your scheduler of choice. If I didn’t have CoSchedule doing all the heavy lifting, I’d be scheduling all of these messages via Buffer. (See my full list of recommended social media scheduling tools.)

Being able to instantly schedule out 30 days worth of promotion for my blog posts in five minutes or less has been a total game-changer for my productivity. It’s almost impossible to count how many hours I’ve saved by using this one feature alone.

The less time I have to spend writing and scheduling social media posts, the more time I can spend engaging with my community.

This is why I highly recommend any serious blogger give CoSchedule a try.

Otherwise, just go out and crush your content promotion with my template and customize it over time to meet your own needs! I’d love to hear how you end up using it.

P.S. If you’re looking for a more exhaustive checklist on blog post promotion, my friend Mike Allton has written an excellent piece (complete with a checklist) which he calls Blog Promotology and it’s the most comprehensive guide I’ve seen. 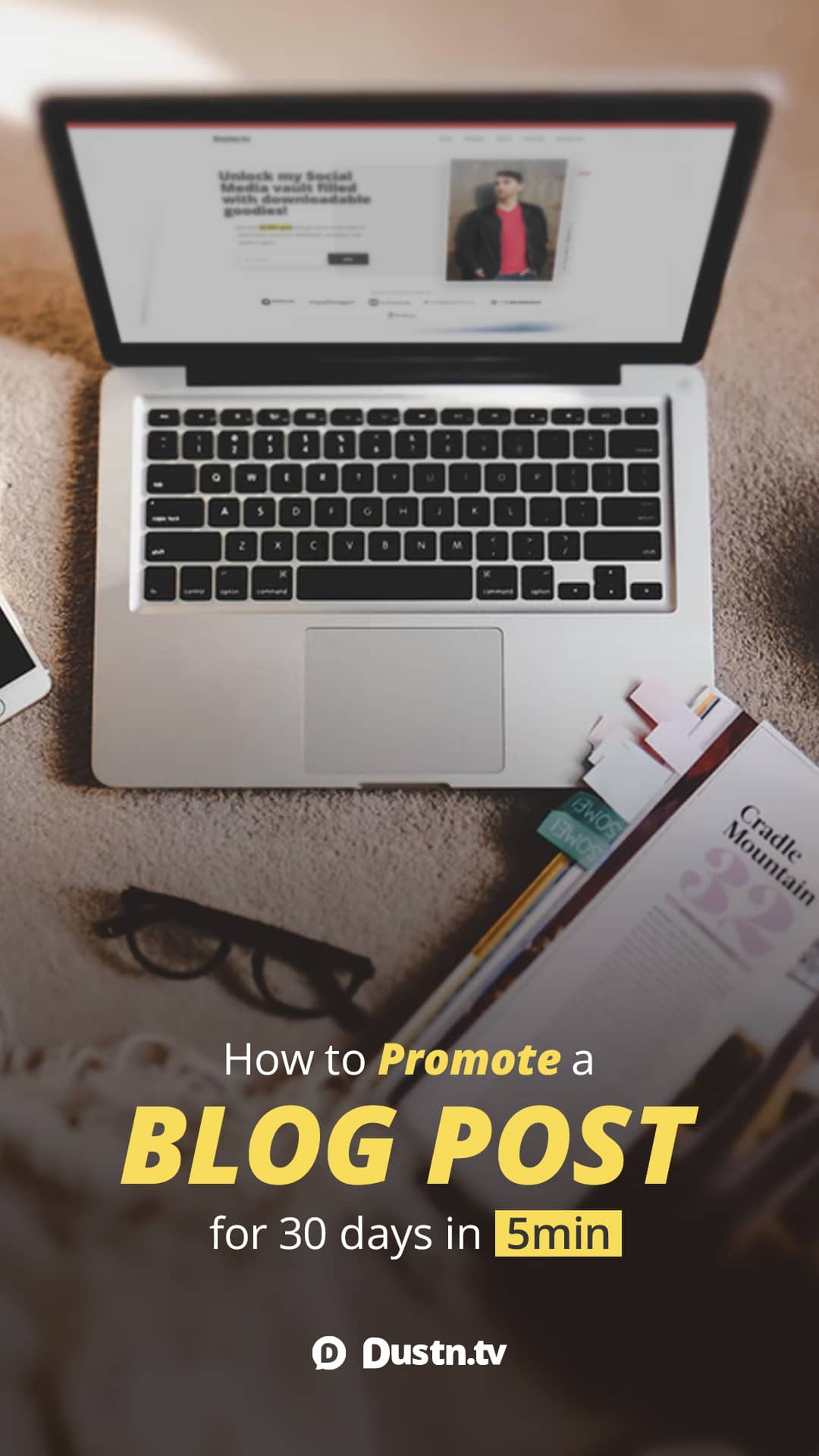