You are here: Home / Creativity / Fighting Change: Have You Bought Into the Lie? 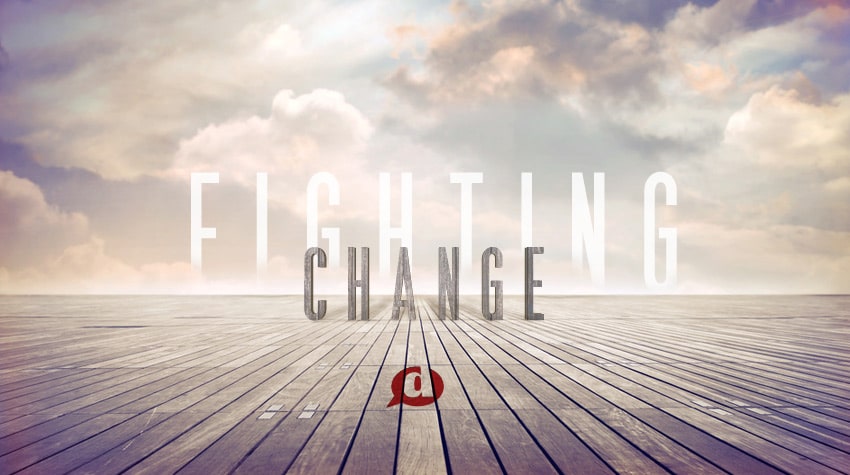 There is a great divide when it comes to the topic of ‘change’. For some, it’s exciting and energizing. For others, it evokes passionate opposition.

Just take a look at any time a social network makes changes. A new layout, a new look, an added feature and you will get a handful of people who are elated and can’t wait to experience it. Then there’s the other group of people who grab their digital pitchforks and start making as much noise as they can.

Some people hate change. The very thought of change causes a visceral reaction. Even the slightest hint at change causes sharp defensive reflexes like a horse pinched in the rear. Stand clear.

These people will fight desperately to hold onto the way things are. They fight back with vigilance and conviction, making assertive claims which would sound as if they’ve been informed (even if they clearly haven’t been).

I saw this first hand when I started talking about Google+ being the future of social media. There were some who violently opposed it. They ridiculed and criticized it because something in them knew something was changing. Even if they didn’t recognize it, their reaction was telling.

There is security in the familiar. People get comfortable when they have a handle on things. They feel safe.

Introduce something new, and insecurity sets in. Suddenly, their secure environment is about to have unfamiliar variables. They don’t have total control. What if they can’t keep up? The fear of failure begins to pollute their judgement.

Life is change. There is nothing in nature that stays the same. Everything that has life is in a constant state of change: growing or dying.

Look at plants– they grow, ripen, and then they die. Once it stops growing it dies. There is no such thing as ‘stagnant’.

People are no different. If you’re not growing, you’re dying. Stagnant is an illusion.

Examples from the Business World

This infographic speaks volumes about the changing state of the world. I saw it months ago and I think it is what started my thought process on this post.

Pay particular attention to the “Refusal to Adapt Resulted in a Failure to Thrive” section.

The old cliche, “If it ain’t broke, don’t fix it,” is no longer relevant. When I hear that phrase uttered all I hear is, “We’re fine with status quo. We don’t need to innovate. We don’t need to grow. Don’t mind us, we’ll just be slowly dying over here.”

Whether good or bad, change is an opportunity to grow. Resisting it is a waste of energy when you can’t control it.