You are here: Home / Social Media / Online Image Terminology That You Need to Know 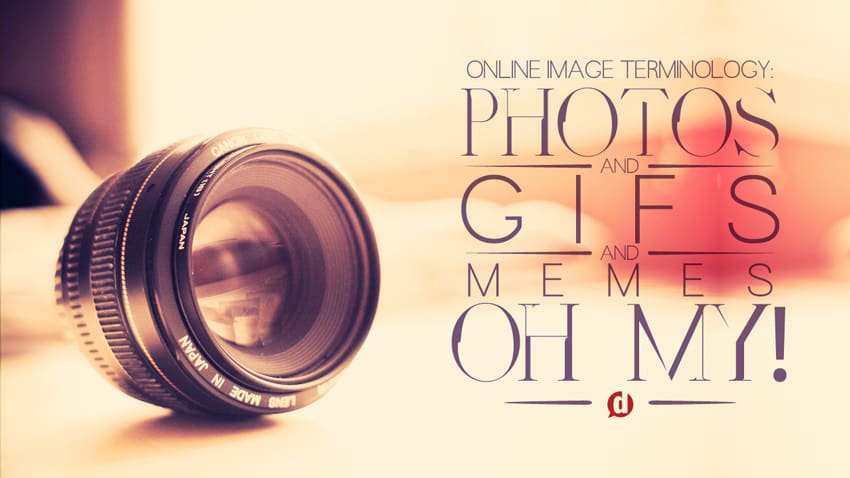 What is a meme? How do you pronounce gif? What is considered an infographic? What’s the difference between a gif and a cinemagraph?

As we begin to take a deep dive into the complex world of sharing images online, I thought it was important to first go over online image terminology. I want us to be able to communicate more effectively, or at least have a reference point when we are talking about the different types of images that are shared online. This will make our conversations more effective and make you sound like the super-savvy online rock star that you are.

Think of this post as your official online image terminology dictionary. (Say that five times fast!)

There are many different types or formats of online imagery. Below I have identified the most commonly shared formats and even introduced a couple new words that help to classify image types that have yet to find their own name.

This is part of my Essential Guide to Sharing Images Online series. You can view the rest of the posts in this series here.

The most common image type is the classic photo. This is a static (non-moving) image captured with a camera. It is not engineered by a graphic artist from scratch— this is a real life capture from the real world. It may have had some work done to beautify it, but the subject matter is taken through a camera lens.

Hang in there folks, we gotta start with the basics!

A gif (pronounced like JIF, the peanut butter brand— not as in “gift” without the ’t’) is an image format that allows for animation. It gives the ability to make “moving” images that play in an infinite loop. (via Wikipedia) A gif can be static, but the format is most commonly used to make animations.

Animated gifs seem to be quite popular and tend to get a lot of social shares when they are humorous. [Image credit: SBNation]

Cinemagraphs are still photographs in which a minor and repeated movement occurs. Cinemagraphs, which are usually published in an animated gif format, can give the illusion that the viewer is watching a video. (via Wikipedia)

These are like the high fashion form of gifs. Great ones can be completely captivating, or really creepy like this one:

A selfie is a type of self-portrait photograph, typically taken with a hand-held digital camera or camera phone. (via Wikipedia – http://dustn.ws/1mlTITC) It’s also one of the most overused words of 2013.

In most cases it’s customary to make a strange, duck-like face when taking a selfie, however not making that face won’t disqualify it as a selfie.

Notice I have refrained from making said duck-face. I refuse.

meme [mēm] (noun) a humorous image, video, piece of text, etc. that is copied (often with slight variations) and spread rapidly by Internet users. (As defined by Google.)

For our purposes we’re focusing on the “image” application. A meme is most commonly recognizable by having a big white-text caption over top of an image that is meant to be humorous.

And in case you want to take a stab at creating your own, here’s an easy way to create your own memes using Google+.

in·fo·graph·ic [infōˈgrafik] (noun) a visual image such as a chart or diagram used to represent information or data. (As defined by Google.)

Now I often see people referring to any type of graphic with words on it an infographic. I don’t think that’s an accurate representation of what an infographic should be. In my opinion, an infographic is any graphic image which communicates multiple data points in a visual manner.

Infographics are one of the best ways to communicate interesting data in a way that people will actually enjoy reading. They’re highly sharable (especially on Pinterest) and when done right can be one of the best forms of content marketing.

Oh, and by the way— it just so happens to be one of the things I love doing. Feel free to contact me here to learn more.

An Infogram is a completely new or concise part of an infographic that works as a standalone piece of content. (defined by NeoMam)

This is a great way of repurposing an infographic for different mediums that may not support very long [tall] images. It can serve as a snapshot (or Headline Graphic) or as part of a slide show.

For every blog post I write, I create one of these types of images. They’re called different things by different people and for all intents and purposes each of the names listed above works just fine.

These images are created with the explicit purpose of being a visual headline for a blog post, article, or webpage.

[Scroll back to the top of the page and see what I’ve done for this post.]

This is a great way to draw attention to a social media post that is promoting a blog post. Visuals will elicit far more engagement and click-through than just a stand alone text post. I’ve done significant testing of this on Google+ and found sharing images always yields more engagement.

Quote graphics are those insanely popular and highly sharable images you see flood your Google+, Facebook, and Pinterest streams. Simply put, it’s a quote that has been created as an image.

Denise Wakman talks about them here and offers some great resources in which to create your own! (I’ll be talking more on this later in this series, but Denise’s article is a great start!)

Although the internet seems to be flooded with these types of images, the ones that are done well can gain a lot of exposure very quickly.

And there you have it

So now that we’ve got some basic online image terminology covered, we can start breaking down specifics on sharing legality, curation, creation, optimal dimensions and non-suckification. Stay tuned for the next part in the Essential Guide to Sharing Images Online series.

In the meantime, are there any formats that I’ve left out? Would you add/take away anything from the definitions above? You can leave a comment by clicking here.

This website uses cookies so that we can provide you with the best user experience possible. Cookie information is stored in your browser and performs functions such as recognising you when you return to our website and helping our team to understand which sections of the website you find most interesting and useful.

Strictly Necessary Cookie should be enabled at all times so that we can save your preferences for cookie settings.

If you disable this cookie, we will not be able to save your preferences. This means that every time you visit this website you will need to enable or disable cookies again.