You are here: Home / Social Media / How to Increase Pinterest Traffic by 2,000% 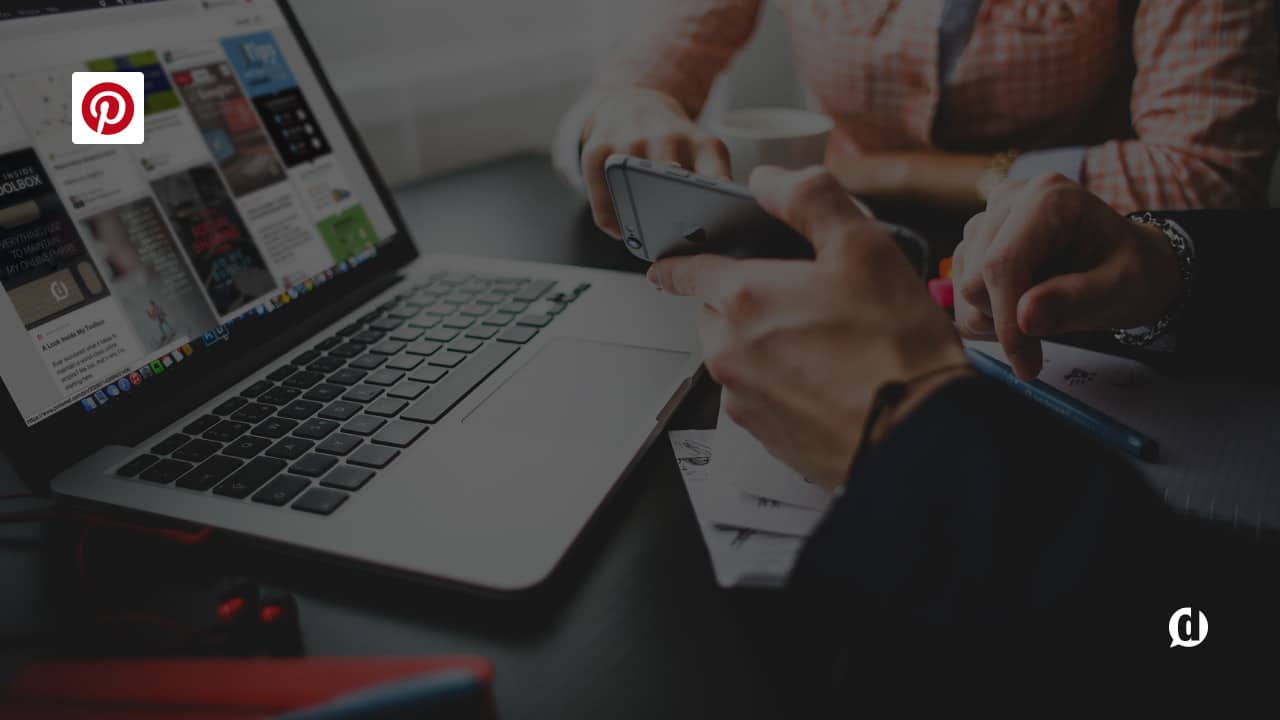 Could you use an extra 1,937% increase in traffic from Pinterest?

Yeah, you read that right. Almost two-thousand percent increase in Pinterest traffic. How the heck did I do that?

Let me start by first showing you where I started with Pinterest and then show you how I got to where I am today.

In 2013 Pinterest was getting a lot of buzz. It was a hot new social network (even though it had been around since 2009) that was turning into a referral traffic machine. And lots of people were talking about it.

Meanwhile, over on Google+, I was having a blast and wasn’t paying much attention to Pinterest. Mostly because Google+ was sending me a crap-ton of traffic and Pinterest wasn’t even a blip on my Google Analytics radar.

I saw Pinterest as something that my wife and her friends used and it seemed like a female-dominant network. Not that there was anything wrong with that.

So when my friend Jeremy Smith started writing about how Pinterest was a goldmine for bloggers, I didn’t really believe him. He then showed me his stats and I immediately became determined to figure it out.

Curiosity turned into complete outrage quickly because something was very apparent about Pinterest: it was extremely visual. As someone who is known for their ability to create visual content, I was dumbfounded as to why my posts weren’t doing better on Pinterest.

Here’s where my Pinterest traffic stood as of December 2013: 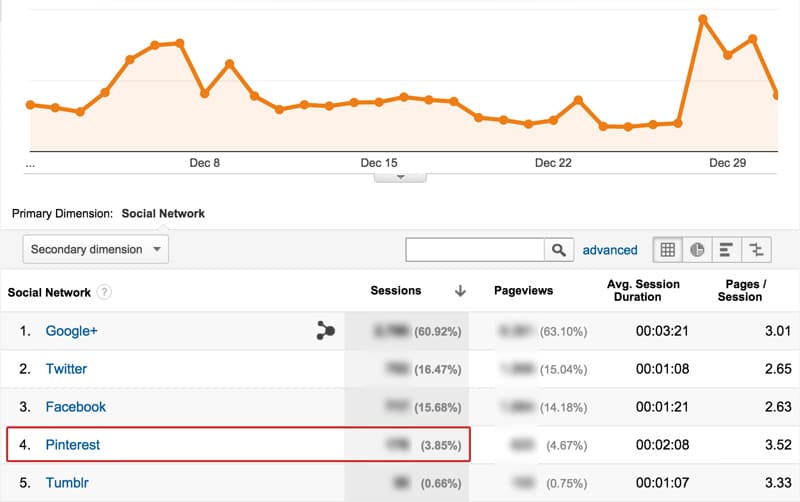 Not very good. Pinterest referral traffic was a laughable 3% of total social network traffic for Dustn.tv.

I had to figure out why my articles and visuals weren’t getting the attention I felt they deserved on Pinterest. So I started studying. Here’s what I found.

After browsing Pinterest for a while you’ll notice that the most predominant type of pins are the ones that are tall.

The width of pins are fixed in the Pinterest stream but the height is not. So if your image is taller, it will automatically take up more screen real estate, giving you more exposure.

This became a visual norm for Pinterest and the users really seemed to love these types of tall images.

Taking note of this, I ended up speaking with +Peg Fitzpatrick and she gave me what she believed to be the golden size ratio for Pinterest. I then began to strategize how I might create a Pinterest-specific image for every blog post I wrote in the coming months.

Armed also with some advice from Cynthia Sanchez at Social Media Marketing World, I was ready to attack this new Pinterest strategy head on.

It just so happened that at the time I was in the middle of my 2014 redesign process. As part of that process, an idea was born.

Here was my problem— I didn’t really like any of the social sharing plugins on the market. I wanted a way to have beautiful, attractive and responsive social sharing buttons on my blog and I wanted to be able to customize what happened when people hit those buttons.

Nothing like that existed. So, I got together with my buddies +Nick Cardot and +Jason Wiser and we decided to build the best social sharing plugin on the market. We named it Social Warfare.

I’ll spare you the full story, but we used the first part of 2014 as a testing ground for how well the plugin worked.

One of the features we were very specific about building into it was the ability to upload a custom Pinterest image that would automatically load when someone hit the Pin button.

I didn’t want to have to shove a vertical graphic into my blog post like most people were doing. It ends up squashing the text and hurting the reading experience. 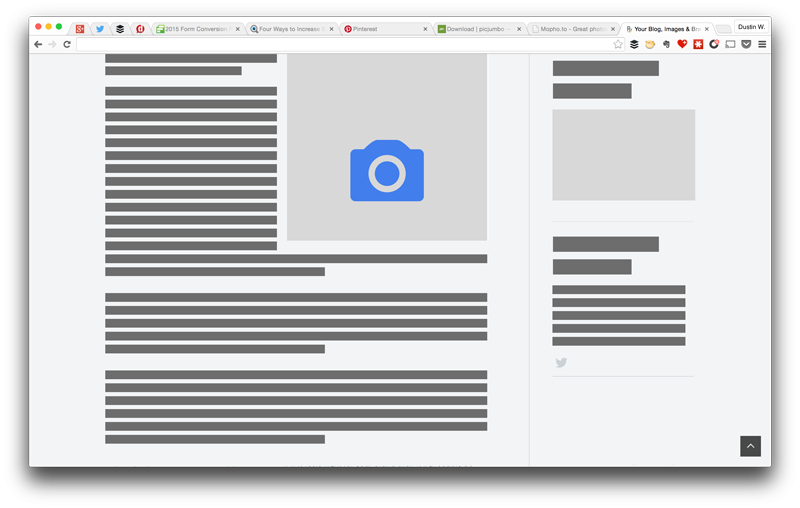 I didn’t like that. So we built the custom Pinterest image option into the premium version of our social sharing plugin.

So Now to Create the Images

Once I had the beautiful sharing buttons and custom Pinterest upload option available, it was time to just start creating the images. 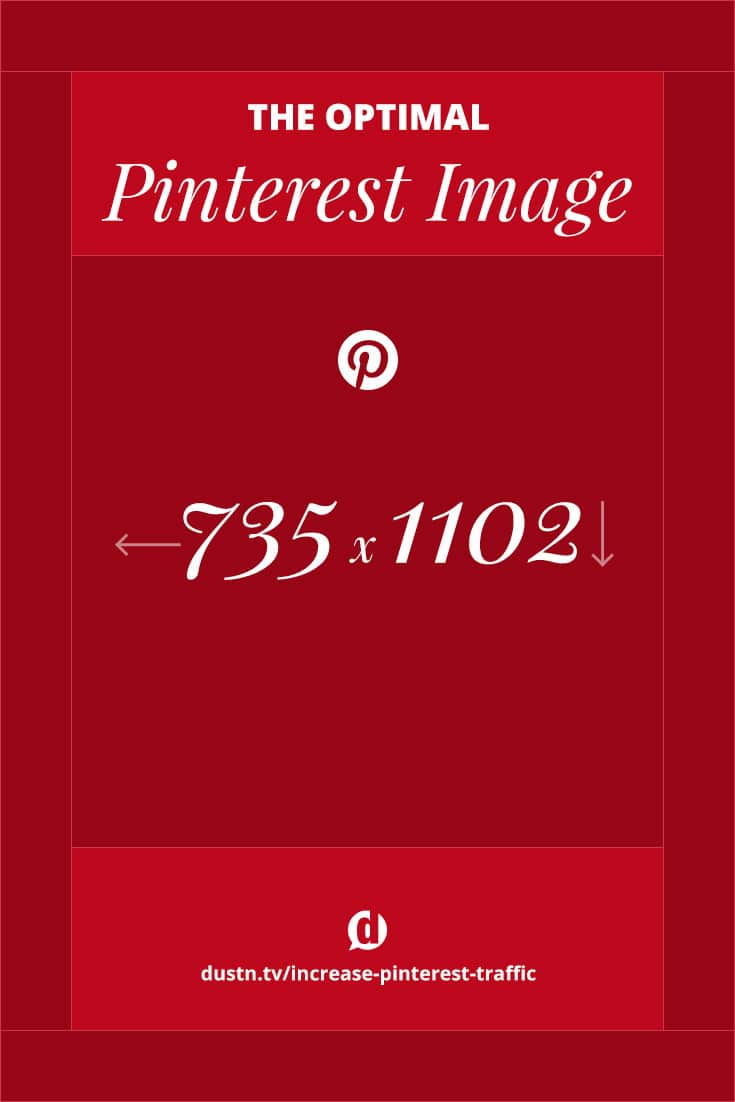 Bonus Social Media Image Templates
Download all my image templates which include my Pinterest template and 3 others!

For every blog post I wrote I created both a standard headline image and a Pinterest image.

Fast forward 1 year later and the overall amount of traffic dustinstout.com is getting from Pinterest is up +1,937% year-over-year. Pinterest traffic is now over 50% of the total social network traffic sent to dustinstout.com. 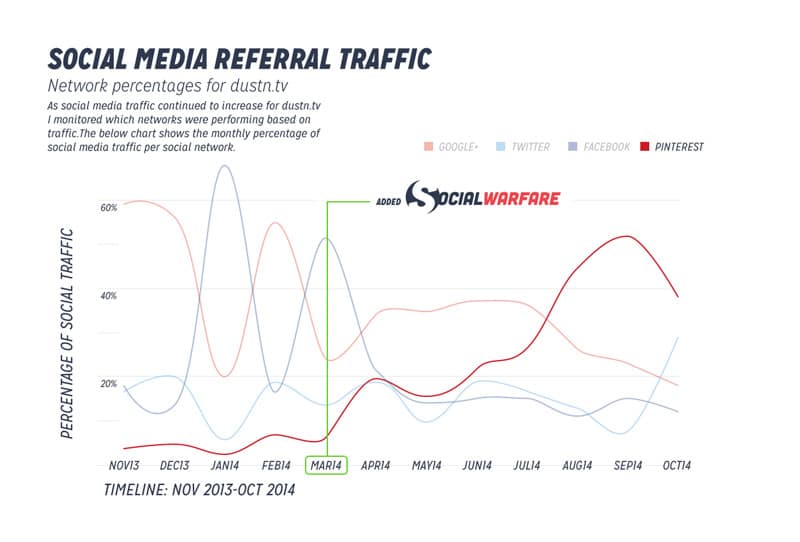 Let that sink in. I blogged less. My traffic skyrocketed.

That’s great Dustin, good for you. Yay. So how do I do what you did?

The first thing you need to do is commit to creating a Pinterest-specific image for every blog post. You can steal my template above (or better yet, steal all my social image templates).

Choose a graphic design software that works for you such as:

I’ve compiled a full list of my most highly recommended desktop apps and mobile apps for creating visual content. Find the one that works best for you and stick to it.

Also be sure that your visuals are:

Even if you’re not a graphic designer, you can create visuals that don’t suck if you follow my three visual content design principles.

You can grab a copy of Social Warfare for yourself and you then have everything you need. But if you would prefer some free alternatives I recommend (all WordPress plugins):

One of the greatest things about Pinterest is that it’s not complicated. You don’t have to spend hours figuring it out and sharing things.

A few minutes invested every day can go a long way:

I recommend starting out by following some of the Pinterest pros such as Peg Fitzpatrick, Rebekah Radice, and Jeff Sieh. Oh, and I guess you can follow me to.

If you follow these steps I guarantee you’ll start seeing the Pinterest traffic on your site go up, and up, and up! 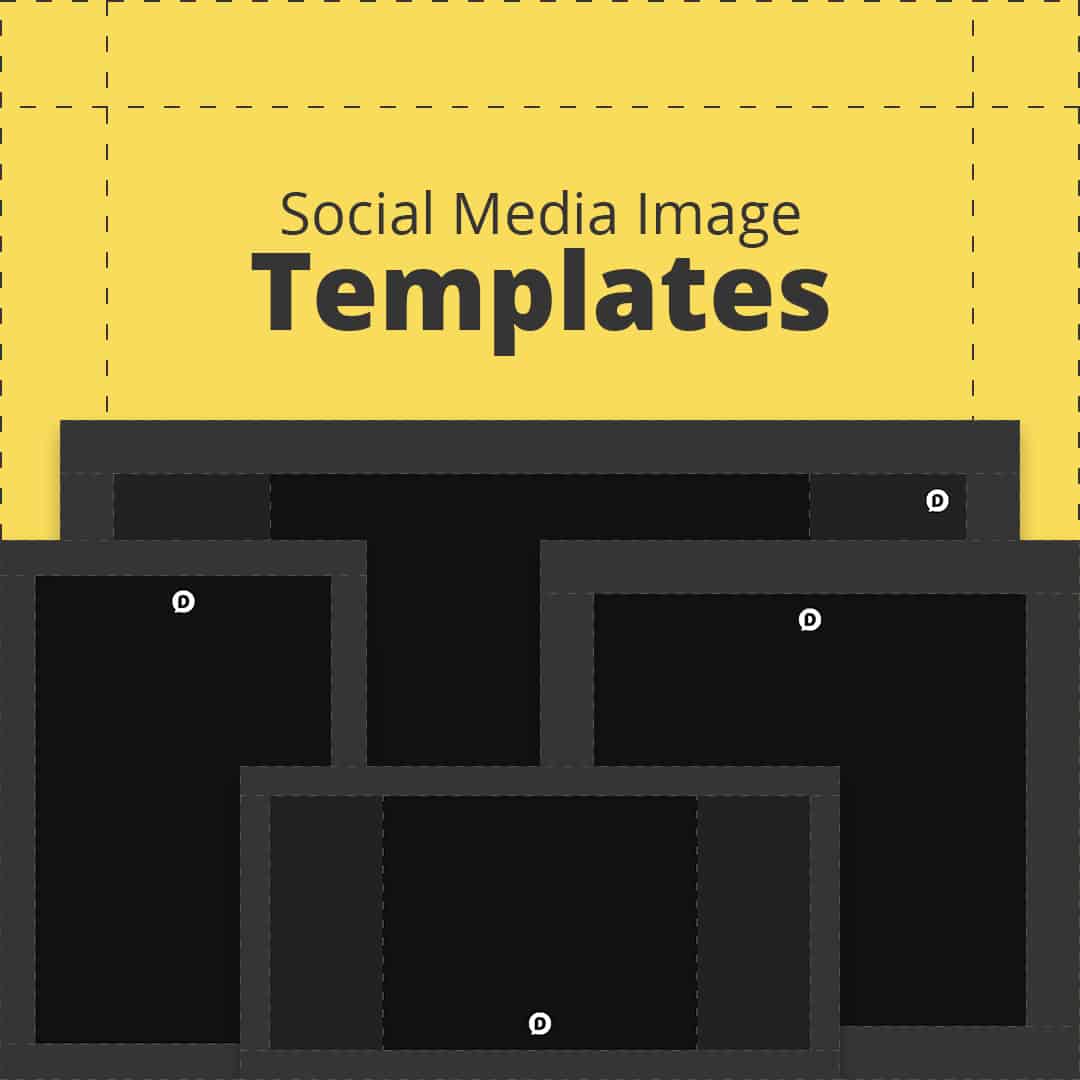 Simply add your email below and click the Download button and I’ll email you all four of my social media image templates which will allow you to create every kind of image for every social network!

Once you build your momentum on Pinterest you will start to see that Pinterest also has some great long-term benefits. Pins have a lot of evergreen value and can continue seeing action long after they were first pinned.

So what are you waiting for? Go get your pin on! 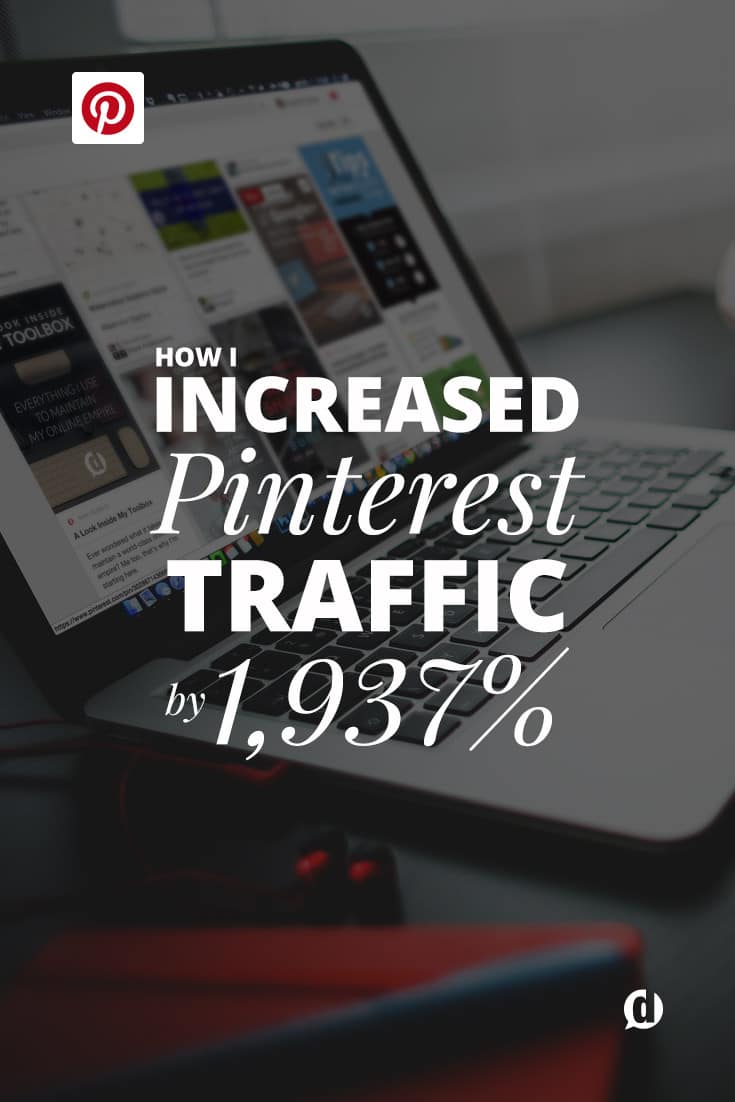