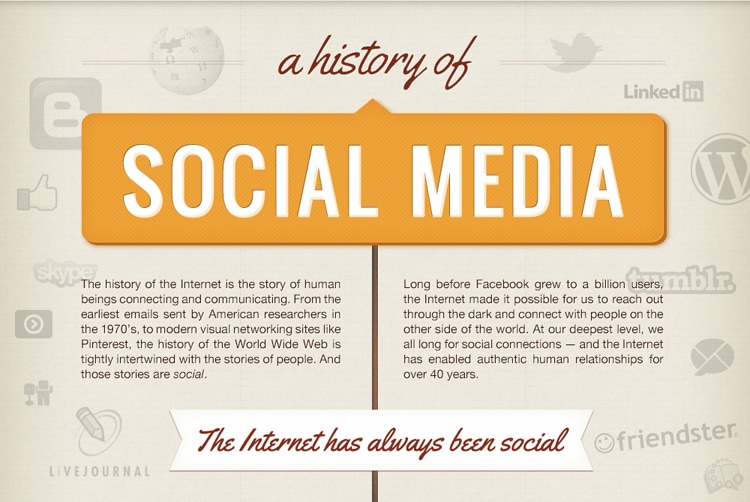 It’s obvious that the “Social Media Revolution” has changed our culture in a big way. Most people think it started with Facebook, or YouTube, or (dare I say it) MySpace. But the truth is, the internet has always been social.

I like the way that Beth Hayden says it over at Copyblogger:

So the concept behind Facebook, LinkedIn, and other social networking tools isn’t new. These sites just give us new, sexy, and easy-to use ways to do what we’ve always wanted to do online — exchange ideas and information.

Below is a brilliantly done infographic that shows a timeline for the history of the internet and social media as we know it today. It’s beautifully done, and fascinating to read through the evolution. Check it out:

So there you have it. Proof that the internet has always been social. It was only a matter of time before technology and the “media” aspect caught up and super-charged the way we share our thoughts, ideas, and relationships online.

I especially love the dinosaur at the beginning of the timeline– brilliant.

I think it’s safe to say that Classmates.com was the first Facebook. While Classmates.com focused on reuniting with old classmates, Facebook was started with the idea of connecting with current classmates and peers (in college). Facebook has since broadened it’s reach to ages 13 and up.

Where would you place yourself on the timeline? At what point did you start using this giant monster called the “internet”?

I would say I place myself right around the “AskJeeves.com” era. I was a big fan of good ‘ol Jeeves in the beginning. I also was pretty active on MySpace in the beginning. I didn’t quite catch on to Facebook until 2007! That’s 3 years after it was made public. Once Facebook really took off though, I began neglecting MySpace and focusing entirely on Facebook.

I joined Twitter while at a Catalyst Conference in 2009. It seemed like it was really taking off and I was curious.

When Google+ was first released as a beta, invite-ONLY network, I was all over it! I scoured the internet for an invite and got one. It was love at first sight. I’m now focusing the majority of my social media presence there. Though Twitter is still one of my favorite social mediums.

So what about you? Let me know where you land on the History of Social Media timeline! You can leave a comment by clicking here.

This website uses cookies so that we can provide you with the best user experience possible. Cookie information is stored in your browser and performs functions such as recognising you when you return to our website and helping our team to understand which sections of the website you find most interesting and useful.

Strictly Necessary Cookie should be enabled at all times so that we can save your preferences for cookie settings.

If you disable this cookie, we will not be able to save your preferences. This means that every time you visit this website you will need to enable or disable cookies again.